Hawkeye Loft Management System Version 8 has been released!  This version comes with a new easy to use interface that makes navigation through the system a breeze.  The Database Engine of this version is far superior to that of Hawkeye 2007 and deliver significant performance improvements.  Users can now import the Winspeed merge file data, produced by the Club Race Secretary for the members - No need to enter any clocking information at Loft and Club level.

Hawkeye Loft Management System 8 Professional is the most feature rich version of our racing pigeon software yet. 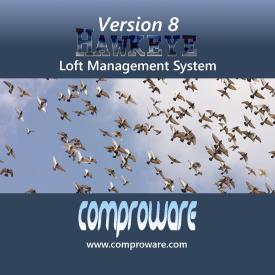 Use Hawkeye Loft Management System to manage your racing pigeon loft. Our pigeon software is used by top pigeon fanciers around the world.

Hawkeye Runs on all Windows versions starting from Windows XP, as well as Linux and Apple OS/X when using CodeWeavers' Crossover Office. or VMWare

Hawkeye is state of the art racing pigeon software, making use of menus, speed buttons, and wizards. Software development commenced in 1990 with the first version released to the public in 1992. Always looking to enhance the product, Comproware continually tests and improves new features with feedback from the racing pigeon community, in conjunction with the latest in IT technology.

The most popular Racing Pigeon Software ever is now FREE!  The Hawkeye Loft Management System, are now available as a Lite version.  To celebrate the launch of our Lite version, we're pleased to offer this release to everyone at no cost.  For a limited time, anyone who downloads and registers for the free Hawkeye Loft Management System Lite can use it for free indefinitely.  Just download the current release of Hawkeye Professional and install it.  You can continue to use the Professional features for 3 weeks and then unlock the Lite features with a free KEY. Get your free Hawkeye Lite KEY here.

Note: You have to be logged in to see the FREE Lite KEY option.  If you do not have a login account, just register - it's FREE.

If you are in the market for Loft Management Software - Here are some things to consider: